Superbe découverte de l’équipe de BIOME Consulting : des Engoulevents dorés sur la route d’Aousserd, 16 mars : ‘… At km137 a nightjar species flew across the road (our first nightjar in five visits). Views were brief as it headed through the headlights and as we tracked it with our spotlight until it melted into the darkness the resounding impression was of a plain bird with large white wing and tail flashes. Despite waiting for 30 minutes or so, there was no further sign of this bird in the area. Later on as we approached Oued Jenna another nightjar flashed through the headlights, identical to the first and dropped onto a flat stony area. A series of short flights again gave a very encouraging impression and within seconds it had settled on the side of the road where it promptly started singing – Golden Nightjar! It was a particularly brief bout of singing before it took off into the darkness. We rapidly connected up the iPhone and played the Golden Nightjar song recording out into the blackness. Out of nowhere a male jinked in, almost making it into the passenger seat before alighting briefly near the car. Trying to secure images of the bird proved frustrating and almost impossible, as the images allude to!
As we stood and listened a further two birds could be heard singing in close vicinity. They clearly favoured areas of open ground, loose sand and scattered grasses rather than the acacia-filled oued. This represents the second record for the Western Palearctic and the first of possible breeding. The winter of 2015/2016 appears to have been exceptional in the region with extensive rains causing a widespread desert greening and with it the arrival of tens of thousands of Black-crowned Sparrow-larks (Eremopterix nigriceps) and successful breeding of many desert species. Two Namaqua Doves (Oena capensis) have also been recorded within the last week indicating that this climatic anomaly may be responsible for northward shift in the distribution of several species. Whether Golden Nightjar will become a permanent fixture in the area remains to be seen, but for now we are still buzzing with the excitement of discovering what appears to be a small breeding population of this stunning species within the Western Palearctic’. 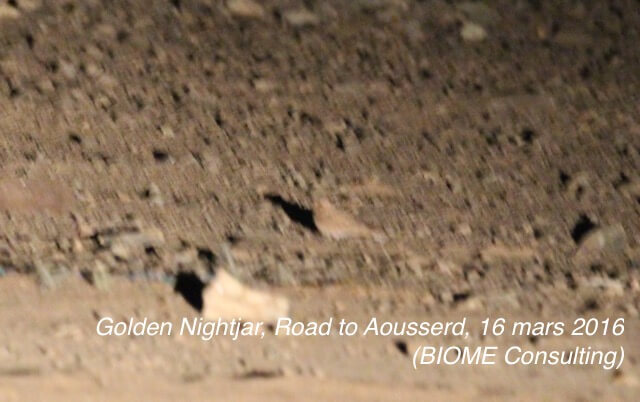