A new paper analyses the presence of Cuvier’s Gazelle Gazella cuvieri in the Lower Draa and Aydar:

‘The Endangered Cuvier’s gazelle Gazella cuvieri is an endemic ungulate of north-western Africa. Information on the species has been based primarily on non-systematic surveys, and the corresponding status estimates are of unknown quality. We evaluate the effectiveness and efficiency of two field methods for systematic surveys of populations of Cuvier’s gazelle in arid environments: distance sampling (based on sightings) and sampling indirect sign (tracks and scats). The work was carried out in the north-western Sahara Desert, in Morocco, where what is possibly the largest population of Cuvier’s gazelle persists. A logistically viable survey was conducted over a total area of c. 20,000 km2 in 10 expeditions during 2011–2014. A total of 67 sites were surveyed, with 191 walking surveys (2,169 km in total). Gazelle signs were detected at 50 sites, and gazelles were sighted at 21 sites (61 individuals). We found a relationship between sightings and abundance indices based on indirect sign, which could be useful for population monitoring or ecological studies. Additionally, the data could be used in occupancy modelling. Density estimates based on distance sampling required considerable effort; however, it is possible to survey large areas during relatively short campaigns, and this proved to be the most useful approach to obtain data on the demographic structure of the population.’ 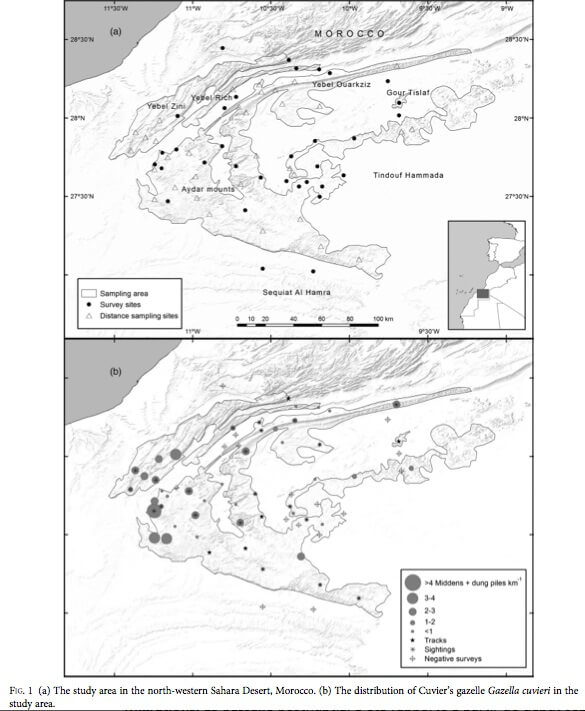