The Ferruginous duck is a winter visitor and breeding resident in Morocco. The species breeds regularly in several coastal and inland wetlands, with remarkable numbers in some marshlands (Sidi Boughaba, Fouwarate, Bargha, Bas Loukkos, etc.). This duck is listed as near threatened in the IUCN Red List, and its populations have been in decline in many European countries.

In Morocco, the national wintering population has known, during the last decade, a strong increase, in both its numbers (from tens to thousands of individuals) and distribution area (from a couple of sites to more than 21 wetlands).

The North-West region of Morocco has been hosting regularly, during the last decade, between 31 and 91% of the Moroccan wintering population, which is mainly concentrated in two marshlands: Merja Fouwarate and Merja Sidi Boughaba. A small reservoir, Barrage Hassar, recently created in the Centre-Atlantic region, has also been, in recent years, one of the most important wintering sites of the species. 15 wetlands have hosted, at least once during the last decade, more than 1% of the regional population of  “West Mediterranean/North and West Africa” 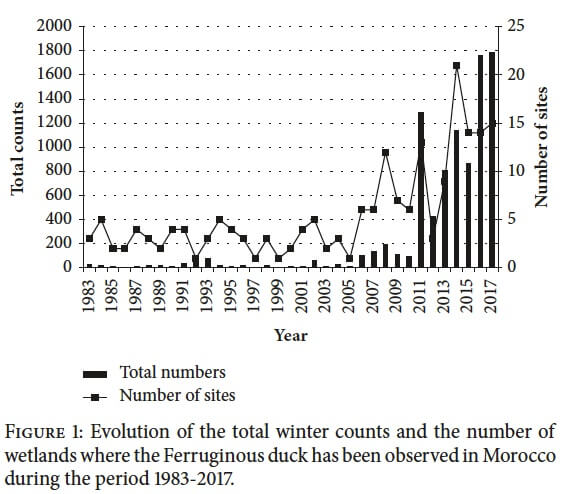